Suspected homicide
Teresa Lyn "Bunny" Fittin was a young woman who disappeared from Florida in 1975. Some believe she possibly left on her own accord, while others, including police, fear she may have been a victim of a homicide. Extensive investigation has taken place in her case. Her latest age progression depicts her at 51.

Fittin left home after an uncharacteristic argument with her boyfriend. She drove a 1964 or 1966 greenish-grey Nash Rambler Sedan that has never been recovered. The license plate read "10-16425."

She took a few possessions with her. Her wallet was later found at a library, over a week after her boyfriend reported her missing. She has also never accessed her bank account since.

Had she left the state, it is believed she could have travelled to Colorado, Tennessee or Philadelphia, Pennsylvania. The latter location was given by a psychic that also claimed she would be working in "the medical field."

The career predicted by the psychic was somewhat inconsistent with Fittin's interests, as she was hoping to become an oceanographer or an artist after her current job as a waitress at a hotel restaurant. 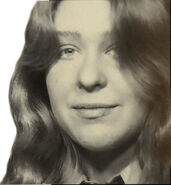 Fittin has been ruled out has the following: