Mekayla Margaret Kim Bali (Born July 2, 1999) is a teenager who was last seen leaving a bus depot. Her age progression picture depicts her at eighteen years old. She may be using the surname Niebergall.

At 6:41 AM on April 12, 2016, Mekayla texted her friend Oksana and asked her to drive her to the bank. She had apparently claimed she had $5000 dollars, but investigation shows that she had nowhere close to that in her bank account. Oksana declined her offer. At 8:20 AM, Mekayla entered Sacred Heart High School where she attended classes. She went to her locker, and 6 minutes later, she had exited the school through a back entrance.

She walked to a bank between 8:50 - 8:55 AM and was seen talking to someone on the phone on CCTV footage. When a bank teller opened the shutters, Mekayla quickly ended the call and asked the teller to withdraw 55 dollars from her bank account.

At 9:00 AM, she entered a pawn shop and tried to pawn a silver ring, in which the owner refused as it was too low of a price.

At 9:15 AM, Mekayla entered a combine Tim Horton's and Wendy's, where she ordered a drink. She sat in a booth with her backpack next to her. However, she never carried a backpack to school, so it appears that she intended to leave Yorkton. She was seen looking at windows and doors in a nervous manner. At 9:23 AM, she exited through one of the two exits; only to walk back in and go to the other exit.

At 9:49 AM, she entered the Tim Horton's/Wendy's, while on the phone with someone who has never been identified. She sat at a booth facing the door.

At 10:12 AM, she texted her friend Shelby and said "Hey, I need help" only to respond later and say, 'Nevermind, I figured it out.'

At 10:43 AM, Mekayla asked a woman to rent a room at a hotel for her, which she refused. 2 minutes later, she exited the cafe, while on the phone.

She entered her school again at around noon, and met with two of her friends, and told them that she was taking a bus to Regina. It is believed that she may have been carrying two phones at the time she was inside the school.

At 12:02 PM, Mekayla left the school for the last time and went to a bus depot. After finding out that the bus she wanted to board would leave at 5:00 PM, she left.

She then entered the UFC Bus Depot, where she ordered a meal at a Trail Stop restaurant inside the depot. No CCTV captures her at the location. Between 1:00 PM - 1:45 PM, Mekayla exited the depot.

She never came home and was reported missing that night. By 7:00 AM the next morning, her phone was off.

Mekayla is not believed to have bought a ticket at the depot, and where she went after she exited remains unknown.

Mekayla has never been heard from since April 12, however, numerous sightings have been reported as recent as 2019. Sadly, it was always too late.

2 months before she vanished, Mekayla made a post on social media with a photo of a Snapchat profile, and wrote this,

"Looking for Snapchat friends because I have none in real life. Add me...Please don't be a greasy fuck and send me gross ass nudes. Just looking for friend."

It is suspected that someone contacted her that day and that Mekayla planned to meet whoever they were that month, possibly in Regina.

A man with a flaming cross tattoo was seen with Mekayla, but it is now believed he was just holding the door for Mekayla and is not a suspect in her disappearance.

Mekayla had apparently been texting a male named "Christopher", and she told friends that he was planning to visit Saskatchewan. Mekayla's ex-boyfriend, who she was still friends with, said that Mekayla had told him that Christopher was planning to visit the Canadian Province to see his mother. Police searched Christopher's home and there is no evidence that he was in Canada during the time Mekayla went missing. Christopher also told CBC News that Mekayla had previously attempted suicide and that she had become better.

Mekayla reportedly had numerous scars on her body, possibly from an incisor.

Mekayla also was reportedly texting a boy named "Josh". Authorities found someone she knew named "Josh" that she hadn't seen in a few years. This person is not believed to be the "Josh" she was texting.

Age progressed to 18, with her glasses. 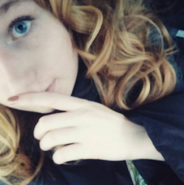 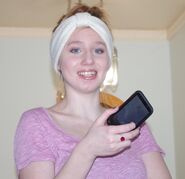 CCTV of Mekayla on the day she went missing. 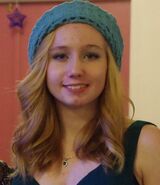