Endangered missing
Lana Kaiser was a transsexual woman who went missing from the cruise ship AIDAluna in Labrador Sea between Canada and Greenland on September 9, 2018.

Born as Daniel Küblböck and assigned male at birth, Lana described having had a difficult childhood in her biography: many moves, a mother who was married seven times who beat her up when her was intoxicated. Her family wanted a girl, which is why Lana took on a more feminine role.

When she was a child, she performed on the school stage and on small stages in Bavaria. In 1998, she completed dance training.

After graduating from secondary school, she completed an apprenticeship as a child care worker, during which she completed internships in kindergartens. She interrupted her training at the end of 2002/beginning of 2003 to participate as a candidate in 'DSDS' (Deutschland sucht den Superstar), the German equivalent of 'American Idol'. Lana, then known as Daniel, had a reputation here as a 'weird bird' due to her appearance and eventually reached third place. She was also known for her androgynous appearance and open bisexuality.

Lana appeared in commercials, television series and television shows. She also recorded albums and played concerts. From 2007, Lana changed her music style to incorporate more country and more jazz. From 2013, she performed under the name Daniel Kaiser - this was to be associated with another image change. From September 2015 Lana completed acting training in Berlin, Germany. She lived in Mallorca, Wiesbaden and Nuremberg and at the time, identified as an openly gay man.

Lana took a trip from Hamburg, Germany to New York, USA on the cruise ship AIDAluna in September 2018. Her father reported that weeks before the trip, he noticed a sudden change in Lana's nature and psychological problems. She therefore tried to prevent the trip.

During the trip, on an unverified Instagram account, with the description "Artist. Actress. Transsexual" selfies of Lana during the trip emerged in women's clothing where she came out as a transsexual woman named "Lana Kaiser". According to. a passenger in a neighboring cabin, Lana behaved conspicuously, for example, frequently talking to herself.

Lana went overboard between 4 a.m. and 5 a.m. A witness reported that Lana jumped overboard off the coast of Newfoundland. The exact location of this was about 185 km north of St. John's in the Labrador Sea. The water temperature was about 10 °C. The Canadian Coast Guard searched for her with two ships, furthermore an airplane and a helicopter searched.The AIDAluna returned to the accident site, another cruise ship, which was in the vicinity, also searched.

The search for Lana was stopped a day later, as the maximum survival time in the cold water had been exceeded.

Lana is considered lost to this day. On March 24, 2021, Lana was officially declared dead. 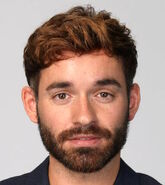