Holly Marie Clouse (born January 24, 1980) was an infant who went missing in 1980 alongside her parents, Tina and Dean, both of whom were later found murdered.

Holly and her parents moved from New Smyrna Beach, Florida to Houston, Texas in the early winter of 1980 after her father found work in the area. Her aunt received a call that same year from an unidentified group saying that they would deliver Dean's car to Florida for $1,000. She agreed and three women dressed in religious robes delivered the car to her. When she asked about the whereabouts of Hollie or her parents, she was told that they had joined a religious group and were cutting ties with them.

Both of her parents' bodies were found on January 12, 1981 in a wooded area near Wallisville Road in Houston, both of whom were victims of homicide. They were identified in November of 2021 through genetic genealogy. Their murder remains unsolved. 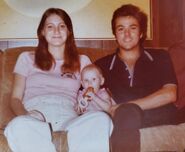 Clouse in 2022 after being located