Denise Diane Pflum was a young woman who vanished under suspicious circumstances on March 28, 1986 in Connersville, Indiana. On July 9, 2020, her ex-boyfriend was charged in voluntarily manslaughter in her case, but died before facing trial on September 26, 2020.

Denise Pflum was a senior at Connersville High School at the time of her disappearance. She was involved in basketball, softball, track, and volleyball and was a member of National Honor Society. She was accepted by Miami University in Ohio where she planned on majoring in microbiology and hoped to get a track scholarship. She lived at home in Connersville, Indiana, with her parents, Judy and David, and her younger sister, Jenny.

Pflum left her family's residence in Connersville, Indiana. She planned to retrieve her purse which she left at a bonfire party that took place in some farmland the night before. The bonfire party consisted of several hundred teenagers. She asked her sister and her friends if one of them could go with her, but because none of them could go, she went on her own. She did not bring her identification, or the carrying case or cleaning solution for her contact lenses. Her mother Judy would later comment, “We’re not sure why she didn’t want to go alone,” Judy said. “She was fearless. Ever since she was a child. So for her to be uncomfortable to go back to the site of the party is unnerving. Something wasn’t right.” The farmer of the property where the party occurred said Pflum did not show up. A distant cousin of Pflum would return the purse to Judy under an hour after Pflum left her residence. A friend of Pflum also said they saw her at a Fashion Bug store on 30th Street at around 2:00 PM. Pflum would be reported missing by her family later that evening.

The following day, a farmer in Glenwood, Indiana found Pflum's 1981 cream-colored Buick Regal locked and abandoned alongside a rural gravel road east of Glenwood called Tower Road. The car had been there since between 12:30 and 1:15 PM and was across the county from where Pflum lived and three miles from the party site. Her family was could not think why she would be there. There were no indications of a struggle at the scene and the farmer initially thought the vehicle belonged to mushroom hunters. Several law enforcement agencies would use canine and air searches, but no trace could be found.

At one point, according to a Radford University article, law enforcement were considering serial killer Larry DeWayne Hall as a suspect in the investigation. Hall was in the area at the time of Pflum's disappearance and Pflum did fit Hall's victim profile.

In July 2020, the Fayette County Sheriff's Department arrested Shawn McClung and he is charged with voluntarily manslaughter in her case. Authorities said he killed her in the heat of the moment and without using a deadly weapon. Although McClung claimed she is still alive, he recently admitted to killing her. McClung was Pflum's ex-boyfriend of three years, according to Pflum's mother. McClung plead not guilty during a court appearance and his bond was set at $500,000. However, McClung died of terminal illness on September 26, 2020 before he could face trial.

Fayette County Sheriff Joey Laughlin has stated law enforcement believes multiple suspects may have been involved, but there is not enough evidence to charge anyone else.

The investigation into her suspected homicide is ongoing.

The following have been ruled-out as Denise Pflum per NamUs:

Denise Pflum in her prom dress shortly before she vanished. 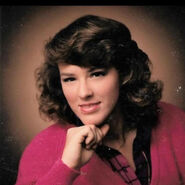 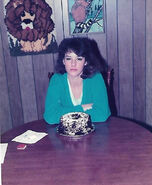