Suspected homicide
Denise Beaudin was a woman who disappeared under suspicious circumstances in 1981. Her daughter, who disappeared alongside her, was located through DNA testing in 2016. Her boyfriend, Terry Rasmussen, known by the alias "Robert" or "Bob" Evans" at the time, was positively identified in 2017 but died in prison in late 2010.

Initially, Beaudin's family presumed she had left home to "start a new life." She was never reported missing until her daughter was found living in California under the assumed name "Lisa Jensen." Her daughter had been abandoned at the age of five by her kidnapper, later confirmed to be Rasmussen.

Additionally, he is strongly suspected of the murders of Marlyse Honeychurch, Marie Vaughn, Sarah McWaters, and his own unidentified daughter. Several other missing persons may have fallen victim to his span of killings.

The following have been ruled out as Denise Beaudin: 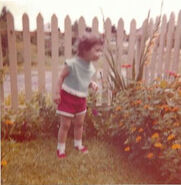